Bargain Read: If I Could Turn Back Time - Nicola Doherty* 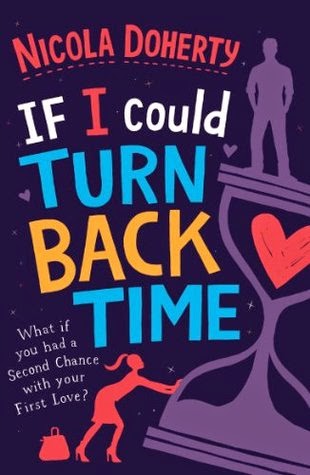 What if you found The One, then lost him again?

Or not so much lost him as became the neurotic, needy girlfriend from hell. The girl who tried to make him choose between her and his job, and got seriously paranoid about his relationship with his best female friend...

Zoe knows she doesn't deserve another chance with David. But if there's the tiniest possibility of making things right, she'll snatch it. Even if it means breaking the laws of physics to do so...


Is it just me who wishes that authors would stop using titles similar to popular songs? I haven't been able to get If I Could Turn Back Time out of my head all week and I think my sister has had enough of my Cher impressions.

As a character Zoë grabbed me instantly; an ambitious, fashion loving twenty-something living in the midst of London and stuck in a bit of a rut, she's definitely a character that's easy to relate to. Working in retail in one of London's biggest department stores and desperate for advancement Zoë's life changes when she wishes she could just go back in time and get her boyfriend back. The fun starts when Zoë wakes up to find herself months in the past, just before things started to go wrong, and goes about correcting all those little mistakes she regrets making and gives herself a second chance at a first impression.


The real strength of If I Could Turn Back Time is that it not only focuses on Zoë's love life but also her family, friends and work. The little name drops that Doherty includes, places out and about in London and fashion trends, turns London and fashion into almost secondary characters and you really get sucked into Zoë's life. Brit-lit at its best I tell you.


All the characters in Doherty's latest are as expertly crafted as Zoë and it was no difficulty to fall for them all in turn, even Jenny. Jenny is definitely that character that you love to hate, I really wanted to jump in and give her a good talking to on Zoë's behalf but I could also see where she was coming from, the perfect villain.

Occasionally the book switches between the same scenario, firstly as it originally happened in Zoë's past and then how it's happening the second time around. I don't know if I was having a slow day but this did confuse me a little at the beginning but after a while I did get used to it and began to anticipate these scenes. I must say that I also didn't really like the ending of the novel, I felt that it was too abrupt and really could have done with a bit more detail to ensure the reader that everything was going to turn out as it should. But I seem to be always wanting more lately.

If I Could Turn Back Time flows fantastically and Doherty makes it all too easy to get sucked in and fall in love with her characters. The romance is a slow build and all the better for it, it'll definitely melt your heart. The blurb on the back of the book was spot on, I did love MacFarlane's You Had Me at Hello and I did love If I Could Turn Back Time. It's the perfect light hearted read with a little added twist, a happy ending and some great laughs thrown in.

*ARC received from the publisher, via Bookbridgr, in return for an honest review. If I Could Turn Back Time is out now and is only £2.62 on the Kindle.
Posted by Rosie at 12:34 am

Email ThisBlogThis!Share to TwitterShare to FacebookShare to Pinterest
Labels: arc, contemporary romance, If I Could Turn Back Time, Nicola Doherty, review