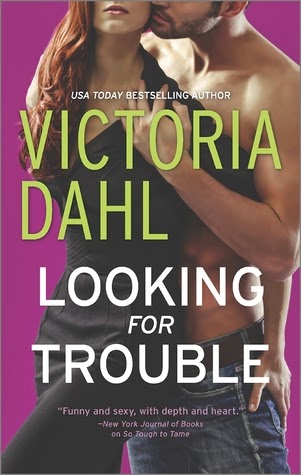 Leading on from the novella Fanning the Flames, Looking for Trouble is the story of second naughty librarian, Sophie. The daughter of one of Jackson Hole's most notorious residents, Sophie's been living her life quietly, avoiding attention and temptation. Unfortunately, sexy biker Alex is temptation on a stick. The son of her mother's lover and a man who's also had to deal with the disastrous fall out of his parent's actions, Alex is the last person Sophie should be attracted to but the first to see past her prim exterior.

Sophie and Alex's relationship has a whiff of the 'star crossed lovers' about it and yet is firmly rooted in reality. Their parents still the source of gossip decades later, the last thing they need to do is attract more attention. Undeniable attraction and considerable lust soon gives way to genuine affection and Sophie and Alex's relationship is a joy to read. Dahl has a way of tracking a relationship from it's easy beginnings to its joyous conclusion. Not once does the relationship feel forced or contrived, the couple faces more than a few obstacles and not everything is tied up in a neat little bow at the end.

Sophie is a great character, typical of Dahl; strong, fiesty and yet vulnerable. Alex, isn't much different. Fully three dimensional, each character has their flaws, issues, and annoying moments. The supporting characters, some of whom we've already met and other's we're sure to soon, are well realised and given just enough attention to make sure that they too aren't merely cliche.

Dahl doesn't shy away from real, everyday issues in her novels and Looking for Trouble tackles its fair share. Dahl treats these respectfully, never merely hastening her plot or brushing them under the HEA carpet. Her books are charmingly romantic, delightfully steamy and yet utterly realistic.

Looking for Trouble is a book that is sure to please any Dahl fan, as well as converting a few more, the perfect romantic and sexy read to curl up with as the weather gets colder.