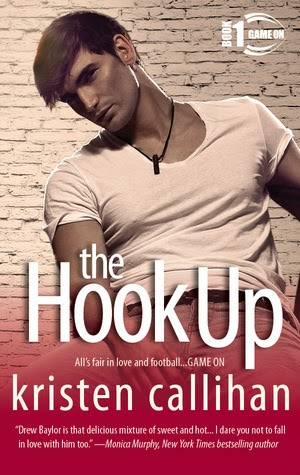 Drew and Anna are an intense young couple but believable for all that. The whirl of emotion and lust that engulfs them is portrayed well by Callihan who tells their story through a well crafted dual POV. Drew and Anna's burgeoning relationship is covered in enough detail to add realism but is fast paced enough to keep the reader gripped.

The sport element of the book is also really enjoyable. A fan of adult romance series with sports themes (such as Rachel Gibson's Chinhook's Hockey Team series and Jill Shalvis' Pacific Heat series) the football element really appealed to me. American football still isn't hugely well known in the UK so the insight in to the college football system was really interesting, as well as a great way to add something new to both the sport romance and new adult genres. Now, I'm not so naive to think that this is an entirely unique plot, I read a similar book involving hockey just this week, but it was new enough to me to be refreshing and engaging.

Whilst Drew and Anna are perhaps young enough to annoy some readers with their drama and inevitable mistakes and misunderstandings, to me they read little different to most romantic heroes. Arguably, the novel's main dramatic arc is a little contrived and the personal conflict is perhaps resolved a little too quickly, but Callihan makes up for that with some considerable emotional depth and tension. Anna's journey in particular will resonate with many a reader who's always been unsure of themselves and struggled with their self confidence.

Fairly indicative of the NA genre as a whole, The Hook Up is not without it's fair share of steamy scenes, pretty much from the get go. For those that enjoy that, I can confidently say that the sexual tension, passion and intimate scenes are some of the most well crafted that I've read and are woven into the plot nicely, not just shoved in towards the end to fill a requirement.

What initially promises to be a repeat of a fairly typical NA read, The Hook Up is executed with enough talent and promise to keep the most hardened romance reader happy. Callihan is certainly going on my list of go-to authors when I want that emotional, sexy and uplifting romance read.